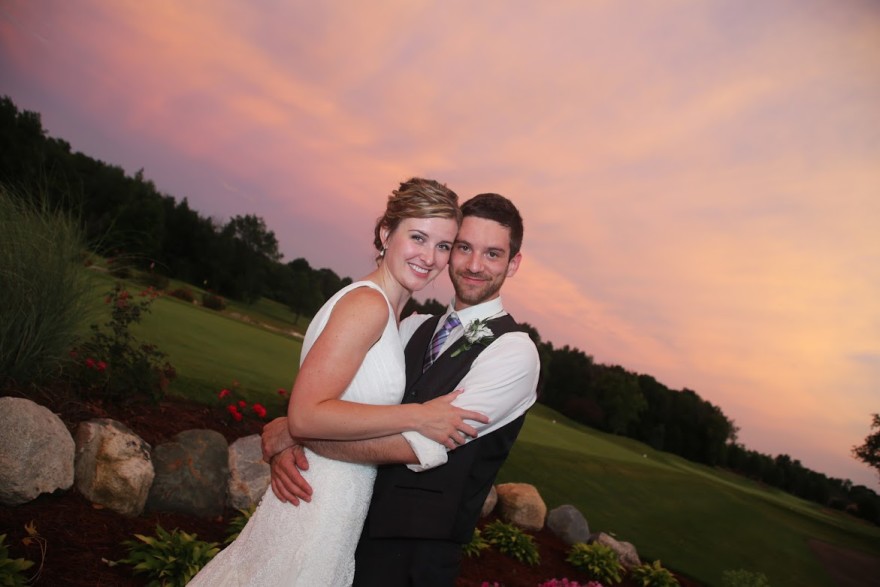 Kaitlin and Eric first met in college. They got to know each other in class before Eric left to perform with his band at the International Blues Challenge in Memphis, TN. While away, Kaitlin realized how much she missed Eric and just how important he was to her. Absence really does make the heart grow fonder.

It didn’t take long for Kaitlin to realize Eric was the one. His innate desire to help people and his willingness to compromise were two strong indicators. Being in similar career fields helped too. Kaitlin was a speech language pathologist. Eric was a music therapist.

“I love the idea of always having a teammate for life by my side. Eric is my constant and my support and knowing he is who I get to end every day next to is such a comforting, safe feeling,” said Kaitlin.

Kaitlin and Eric had planned a long, 10-day camping trip to the Upper Peninsula in June 2013. Eric had asked Kaitlin’s parents for her hand prior to the trip, and Kaitlin had a sneaking suspicion this may be “it.” On their first night, Kaitlin and Eric stopped at Wilderness State Park just south of Mackinac Bridge. It was Kaitlin’s dad’s recommendation. He knew of a romantic area there that made you feel like you were completely surrounded by water. Kaitlin and Eric hiked to the spot. Soon after, Eric spoke some beautiful words about their future and got down on one knee (in the mud!) to propose.

Kaitlin wanted her wedding to be pretty and comfortable, with bright colors and personalized touches. This meant nearly every aspect of her and Eric’s wedding was DIY. The centerpieces consisted of hundreds of glass containers, some vases, some salt and pepper shakers, some bottles, etc. The dessert was donuts from the couple’s favorite donut shop in Kalamazoo rather than a traditional cake. The guest book was a hand drawn tree by Kaitlin’s uncle and its frame handmade by another uncle. Guests put their fingerprints on the guest book to form the leaves of the tree. Eric is Jewish, and Kaitlin was raised Catholic. They made sure to incorporate traditions from both faiths, breaking the glass, the hora, the unity candle interpreted as a unity tree, which was planted using soil from each of their parent’s houses.